When Belfast was granted its Charter in 1613, fewer than 1,000 people lived in the newly created town.  The early town was located entirely on the west bank of the Lagan, close to its confluence with the Farset River.  By 1787 Belfast had developed into a bustling port-town with a population of approximately 17,000. The area to the east was still largely rural and consisted of some fields and a few cottages. That year, the owner of Belfast, Lord Donegal, bought Ballymacarrett, with a view to developing the area.  By 1901 Belfast’s population had grown to almost 400,000.  Over 100,000 now lived on the eastern side of the river Lagan in and around Ballymacarrett.

Linen was of major importance to the city’s growth.  Most of the earlier mills were in the west and north of the city but with the introduction of steam power in the 1830’s mills began to appear all over the city including the east.  In the second half of the nineteenth century however, shipbuilding became the major industry in east Belfast.  There were also several other associated industries such as engineering and rope making.  East Belfast would boast of having the largest rope works in the world located where Connswater Shopping Centre is now.

By the turn of the 20th Century, Belfast was the most important industrial city in Ireland.  Like the other great industrial cities in the UK such as Manchester or Leeds, most of its population migrated from the adjacent countryside.  However, as the major industrial centre in Ireland, Belfast, including the east, also drew people from all over Ireland and further afield.  Every county in Ireland was represented in inner east Belfast in 1911.  In the Pottinger Ward, just over 10,000 of the almost 40,000 people living there had been born in Co Down and less than 6,500 had been born in the other counties of Ulster.  Over 22,500 had been born in the other provinces.  This mix of people brought a wide range of religious beliefs to the area and created considerable religious diversity.  However, except for the Short Strand area, most of the population was Protestant.

Although employment in east Belfast was plentiful, working conditions were poor.  There was often no guarantee of work; what we now call zero hours contracts were commonplace.  Unskilled labourers who were fortunate enough to secure regular employment typically worked a six-day 54-hour week.  For this they were paid between 15s (75p) and 18s.6d (92.5p).  Skilled tradesmen were paid £1 18s 3d (£1.91).  Women worked mainly in the mills and textile industry and could earn between 10s. and 18s. per week.

Labour disputes were common.  In 1907, what began as a walk-out by east Belfast workers demanding better pay in the Sirocco Engineering Works led to a general strike affecting the shipyards and other industry.  RIC officers refused to protect ‘blackleg’ strike breakers and the army was mobilised to restore order.

There were other tensions in east Belfast.  The third Irish Home Rule Bill in 1912 was welcomed by nationalists but in the unionist community opposition was widespread, as demonstrated when almost half a million people signed the Ulster Covenant.  This led to increased polarisation between the Catholic and Protestant communities.  When the Ulster Volunteer Force was formed to resist Home Rule, many young men in east Belfast joined up:  some of whom would later fight in WW1 in the Ulster Division and other units. 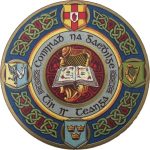 East Belfast had been at the centre of the Gaelic Revival movement with both the Gaelic League and the Gaelic Association active from the late 19th Century.  The status and use of the Irish language, and the broader Gaelic revival movement was non-political and non-sectarian, and in the early years attracted many prominent Protestants and unionists including from east Belfast.  But in the years before the War, the movement began to reflect growing tensions in the city and beyond.  By the end of the war, the Irish language came to be seen as the preserver of nationalists.  At the same time, participation in and commemoration of, the war became associated with unionism.