Seventy-four soldiers were identified. They all lived in inner east Belfast in the area between Holywood Arches and the Albert Bridge. Before the war, many had worked in the shipyard or the ironworks, either as skilled workers or as labourers. Others worked as firemen, commercial travelers or in the building trades.

Many of the men enlisted in the early weeks and months of the war as part of the initial surge of recruitment. But others joined later, usually as they reached the eligible age of 18. The majority of the soldiers were in their late teens or twenties when they enlisted but the oldest was over 50. There were also some who enlisted when they were under age: mostly these were soon discovered and their enlistment declared invalid due to ‘misstating their age’ but more than one avoided detection and continued to serve until disability or death ended their military careers.

James Hickland was one of six children living in Tildarg St with their parents Hugh and Mary Hickland. All of the children could speak Irish.  James was just 15 when he enlisted in December 1914, but he stated his age as 19 and his occupation as labourer.  He was considered fit for service and was assigned to the Royal Irish Rifles.  He was discharged one month later in January 1915, when his true age was discovered.

Patrick Joseph Kennedy was the only son of Bernard and Elizabeth Kennedy. He had one sister, Mary Ellen.  In 1911, Patrick and his sister were living in Mount St with two unmarried aunts Mary Ann and Maggie Morley.  Although Patrick was not yet 15 years of age, he enlisted in November 1916, giving his age as just under 19 and his occupation as labourer.  His attestation papers notes that he was considered fit for service at home and abroad and he was assigned to the 3rd Royal Irish Rifles.  His misstatement of age was not detected until just over one year later in November 1917 when he was discharged when it was discovered he was underage.

Joseph Kearney was not so fortunate. He lived in Khartoum St with his parents and five siblings.  He enlisted in November 1915 when he was just 16 or 17 years old but the misstatement of age was not noticed.   He served with the Royal Irish Fusiliers and was dangerously wounded in 1916.  He was discharged in October 1917 and was described as permanently and totally disabled due to his wounds.  He returned to Belfast and according to his pension records he was living in Scotch St in 1929.

Edward (Ted) Arthur was born in 1898 in Belfast. He was the son of Edmundson and Mary Jane Arthur.  In 1911 the family lived in Dunvegan St.  The family was Church of Ireland.  Edward enlisted at the outbreak of the war, in September 1914 when he was just 15 or 16 years old.  He was assigned to the Highland Light Infantry, 1st Bn. and posted to France.  He was killed just three months later in December 1914.  He is commemorated at Le Touret Memorial France. 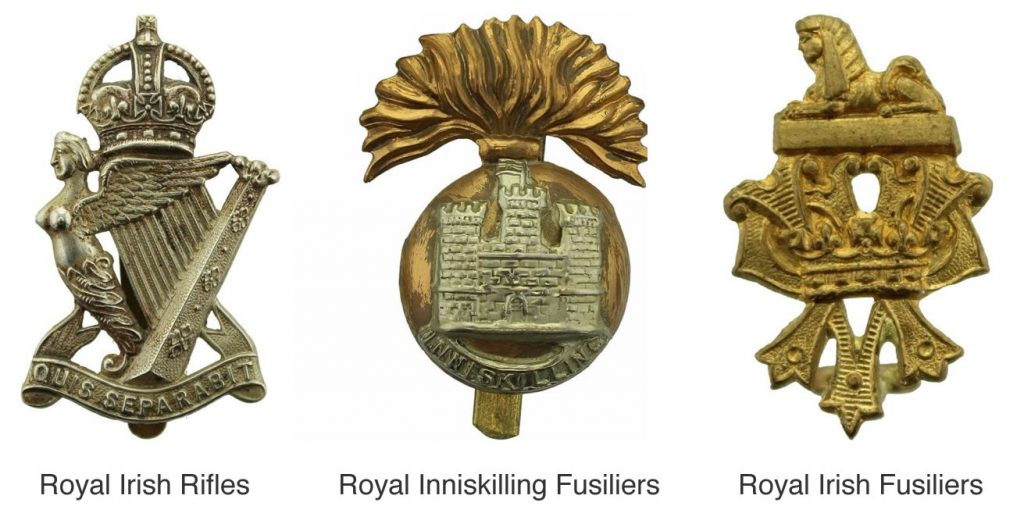 The Royal Irish Rifles and the Royal Inniskilling Fusiliers, along with the Royal Irish Fusiliers, comprised the 36th Ulster Division which saw action at the Somme.  The 36th Division was one of the few divisions to make significant gains on the first day of the battle, but it came at a heavy price.  Among the many thousands of soldiers who died at the Somme were five of the soldiers included here.  They were killed in action or died of wounds soon afterwards.  They are commemorated at the Thiepval Memorial.  In all, 18 of the soldiers included here were killed during the war.  Mostly they died in France or Belgium, but some died at Gallipoli.

Not surprisingly, given the small area from which the soldiers are drawn, many were neighbours who lived on the same street, before and sometimes after the war.  There were also workmates employed in the same industries: at least seventeen of the soldiers worked in the shipyards or the ropeworks, mostly as labourers.  There are also family groups, eleven in all amongst the soldiers:  nine of these were groups of two or more brothers, one a father and his two sons and one an uncle and nephew.

David Maxwell lived on Tamar St, as did two other soldiers both called John Clarke.  They lived within doors of each other, but served in different regiments or battalions.  One John Clarke lived in 62 Tamar St with his wife Harriett.  He worked in the rope works and served with the 2ndRoyal Irish Rifles.  He lost an arm as a result of wounds received but survived the war.  The second John Clarke lived in 52 Tamar St with his parents.  He was a shoemaker before the war and served with the Royal Marine Light Infantry.  He too survived the war.  David Maxwell was a plasterer’s helper before the war and was living in 68 Tamar St with his wife and young family.  He served as a Lance Corporal with the 6th Royal Irish Rifles, but was killed in action in Gallipoli in October 1916.  He is commemorated at the Dorian Memorial.

Bernard and Gerald Hughes were two brothers who lived in Khartoum St.   Bernard served as a private with the Seaforth Highlanders and was awarded the Military Medal for Bravery.  He survived the war.  Gerald enlisted several months after Bernard in November 1915.  His attestation papers state he was 19 years and 8 months but from the census information it was likely he was not yet 18.  Unusually, he enlisted in Derby and joined the Sherwood Foresters. It seems however that he was discharged just 5 days later.  No reason is given for his discharge, but it is likely it was discovered he was underage.  Their neighbour was Joseph Kearney, who also enlisted underage, and who went on to be seriously wounded.

William and George Davidson were two of the six children of David and Agnes Davidson of Lisavon St. David Davidson was a general labourer and his two older sons worked in the shipyard.  In 1911, William and George were aged 13 and 11 respectively and both were still at school.  George served as a private with the Army Service Corps while William served with the 16th Royal Irish Rifles.   Both brothers survived the war.

The Ervine family lived in Frome St in 1911. The father, John Snr and his two sons, John Jnr and Thomas enlisted.  John Snr served with the 8th Royal Irish Rifles.  Thomas served with the 5th Royal Inniskilling Fusiliers and also with the Army Medical Corps.  John Jnr served with the Royal Horse Artillery.  All three survived the War and returned to live in east Belfast.  John Snr died in 1924 aged 52 and is buried in Dundonald Cemetery.

George Wright was one of ten children of John and Maria Wright. He lived with his parents and siblings in Upper Frank St.  He had seven brothers, three of whom also fought in the war.   Before the war George worked as an apprentice clerk.  He was just seventeen at the outbreak of the war.  His enlistment date is not known but he served as a private with the Royal Irish Rifles.  He was wounded in both legs but went on to survive the war.

William Spence was one of two brothers who served. He lived in Josephine St, along with his wife, Maggie and their six children.     Before the war he worked as a labourer.  William joined the 4th (Extra Reserve) Battalion of the Royal Irish Rifles and had probably enlisted before the war started.    He was deployed to France in May 1915 and the following year sustained gunshot wounds.  He was listed as missing in 1918 but was later identified as a POW.   He survived the war and was discharged in January 1919 when he returned to Belfast and continued to live in Josephine St until 1926.